This is a situation that has evolved well over the last decade and has been underway since the end of the last century. The region is a natural geopolitical connector and has to be viewed and examined as such. Over the last two hundred years and as the Anglo-American international system was emerging the Eastern Mediterranean has been sidelined in favor of the “Near East” and the “Middle East” depending on the structure of power within the international system, especially as the British and the Americans respectively were either interested in India or China, or fighting the “Great Game,” against Russia and the Soviet Union respectively. In this context the identification “Eastern Mediterranean,” disappeared and terms such as Middle East or MENA emerged. The energy competition in the region has brought the region to the forefront of international attention, and has also exposed the changed geopolitical landscape. A geopolitical landscape that includes an area from the Indian Ocean to the Black Sea, and the competition not only for energy, but for wider influence as the Americans and British no longer the absolute arbitrators, there are regional suitors, willing proxies and new arrivals, and not necessarily just states, but also multinationals and non-state actors.

There is a tendency to compartmentalize the assessment of events in the Eastern Mediterranean, either by looking at bilateral competition or by looking at the region as a self-contained entity, without paying attention to the regional linkages or to the concentric connections around the region. The only truism is that the region of Eastern Mediterranean was and continues to be a connector and a bridge and as such it is a complex structures of alliances and balancing power arrangements. As such it is a mistake and a dangerous underestimation to reference and rely on international law and norms as a means of resolving the storm that is developing in the region. Along with the departure or presumed diminishing Anglo-American presence is also the legal and normative construct that has been underwritten by those two global powers in the 20th century. If we were to pan out and view the region in a radius that extends to Djibouti to Baku, Ukraine and Gibraltar, we would be able to have a far more accurate assessment. The Eastern Mediterranean today is the epicenter of competition, which stretches not only geographically, but has been going on since the 2008 Bucharest NATO summit. During the Spring of 2008 conference the European NATO allies rebuffed the United States proposal for inclusion of Georgia and Ukraine into the alliance. Later in the year Russia moved in to Georgia in support of Abkhazian and South Ossetia independence, laying down a marker, and the dawn of the new era in the region, including the Eastern Mediterranean. In January, 2009 there was the now famous spat between Prime Minister Erdogan and President Shimon Perez in Davos, which further cemented the changing of the guard in the region. The Obama administration continued to signal the departure of the United States from a hegemonic position in the region, in favor of a multilateralism. The crises in Libya, Syria, Cyprus, Ukraine and Greece from 2011 until 2015 have set the stage for what we are currently witnessing in the region. Each of these events challenged the geopolitical status quo, and the normative institutional framework, ushering in a period of unfettered competition in the Eastern Mediterranean, while most of the states in the region had been affected either by the Eurozone crisis or by the Arab Spring, there was only one country which seemed to be unscathed, until July 2016. The dramatic events of the coup seem to have been the last step in pushing Turkey to take a more aggressive stand in the region and to fill the vacuum in the region from the Black Sea to the Indian Ocean and from Qatar to Albania. Turkish foreign policy since the 1980s toyed with the notions of Pan-Turanian or neo Ottoman dreams and ambitions. However, Turkish administrations were timid and reluctant to act within the uncertain geopolitical environment immediately after the Cold War. It appears that after 2016, Turkey and the Erdogan administration have been untethered from the alliance structures, as the coup has been assessed as a betrayal of the “western alliance” and that the current state of multilateralism in the region allows for a distinct Turkish role, not only in the Eastern Mediterranean, but in the entire region. The energy competition in the Eastern Mediterranean and the fact that the letter of international law, especially in relation to the law of the seas, in relation to Turkey’s interests further sets the region as the epicenter of the looming confrontation. Turkey’s aggressiveness in the region, should not be perceived as such, rather that Turkey views the imminent confrontation as existential, which makes the situation much more dangerous. This is not a dispute over the reading of international law in relation to the Continental Shelf vis-à-vis the Exclusive Economic Zones. Turkey is acting without the restrains of the last seventy years of the network of the western alliance structures. The rapprochement with anti-Saudi Arabia segments of the Arab world, Iran and Russia are examples of the changing trajectory away from the EuroAtlantic institutions and toward an independent and quite possibly confrontational approach. The current confrontation with Greece over the sea zones is more symbolic, rather than real. Greece and the Law of the Seas represents for Turkey, everything that has “unfairly hampered” Turkey from reaching its deserved exceptionalism and hegemonic position in the region. Thus it is a mistake to think that Turkey can be satisfied and appeased, as Mr. Erdogan, his administration and his constituency are seeing a historic moment, that can not only reverse the last seventy years of “EuroAtlantic subservience,” but restructure the “disastrous Treaty of Lausanne” and possibly the 1774 Kutchuk Kainardji treaty, which rendered the Ottoman Empire, “the Sick Man of Europe.”  Not being able to hear and read these signals from the current Turkish administration can have horrible effects for the region.

The acceptance on the part of the United States, since the second George W. Bush administration, that the American hegemonic period in the region since the Truman Doctrine has come to an end, has led subsequent US administrations to follow policies, of “Pivot to Asia”, “Support the Arab Street” or that of “Multilateralism”. In all three instances the departure of the United States from the role that they have ascended to in the area since 1947 and 1956, has unleashed forces in the region and has untethered Turkey to fulfill its centuries-old ambitions and has made the Eastern Mediterranean, the epicenter of a cyclone. 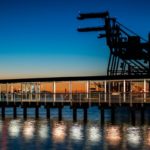 Untethered Turkey and the Eastern Mediterranean in the center of cyclone