Leif Wenar, Professor of Philosophy at Stanford University and author of Blood Oil: Tyrants, Violence and the Rules that Run the World speaks to the ENA Institute for Alternative Policies – Centre for Political Theory about the ‘resource curse’ that afflicts both resource exporting and importing states. He analyses how our own laws facilitate the emergence of the resource curse and argues that we should abolish the outdated trade rules that put us into business with oppressive, violent, and corrupt actors.

In your book, Blood Oil, you discuss the idea of the resource curse. Can you tell us what it is and how it works?

Most people think of valuable natural resources like oil, metals, and gems as a blessing for a country. And they can be—but they can also be a curse.

Think of countries like Myanmar, Iraq, Iran, Syria, Libya, Angola, the Democratic Republic of Congo, Zimbabwe, Venezuela, Azerbaijan, even Russia. In these states, authoritarians, corrupt officials, or armed groups make a lot of money by selling the natural resources to foreigners—and without any accountability to the citizens of the country. In these places, foreign resource revenues are a huge source of unaccountable power—of absolute power. And that’s why we’ve been seeing such bad outcomes in these kinds of countries for many years.

Think about the West’s worst foreign threats and crises over the last 40 years. The Soviet Union, Iran, Saddam Hussein, Muammar Gaddafi, Al Qaeda, ISIS, the Syrian refugee crisis, Vladimir Putin. All of these threats and crises came from countries that exported a lot of oil to the West. So, we consumers in the West actually helped to pay for the bombs and the bullets and the cyber-attacks that were used against us.

Once again, the problem is that we make it legal to buy natural resources from men who are unaccountable to the people of their countries. This is what sends our money to these men, and gives them a lot of unaccountable power. A lot of that power is directed against the people of the resource-exporting countries. But some of that power also ends up spilling over onto us. Most of the West’s worst threats and crises have come from men who, in one way or another, we consumers have empowered through our daily purchases at the gas station, at the shops, and online.

So, our own trade rules force us to fund corruption, violence, war and oppression. Tell us about Clean Trade Policy (cleantrade.org)- the framework that underpins the movement that works to abolish the outdated rules that put us into business with oppressive, violent, and corrupt actors.

Yes, you’re right—it is our own trade rules that today force consumers to fund all of these things. But the good news is that these are our own trade rules, so we can change them. Any country can get itself out of business with the men of blood overseas, all by itself. And any country can do this quickly, peacefully, and relatively cheaply. All we have to do is to change our own rules, for our own people, to say that it will no longer be legal for us to buy natural resources from anyone who is not minimally accountable to the people of that country.

This is a matter of living up to our own principles, to further our own interests. Our principles say that we believe that every country ultimately belongs to its people—not to whoever has the most guns. If we believe that, then we should think we don’t have a right to buy resources from anyone not accountable to the owners. If we do, by our own principles we’re really buying stolen goods—goods stolen from the people, by the dictators and warlords and militias.

Right now, any country can pass a Clean Trade Act that makes it illegal to buy resources from these men. In doing so, a country would send a message to, for example, the leaders of Saudi Arabia, that says, “Who rules in your country is none of our business, but until you become minimally accountable to your people, you’ll get none of our business—we don’t believe that we have a right to buy oil from you.” This would also send a strong message to the peoples of resource-cursed countries that we are on their side. With peace, with principle, one might say “at last,” our countries are going to the right thing by the people by no longer sending our money to those who are oppressing and attacking them.

Passing a Clean Trade Act might sound like a big ask. But Brazil already has a Clean Trade Act live in its Senate. If Brazilians can get out of business with those who are stealing the resources of their own people, perhaps we can too. This is an ambitious policy proposal that might generate worries on both sides of the political spectrum. The Right might perceive this proposal as interventionist or anti-market, while the Left might be sceptical towards a policy that advocates sanctions against countries in which the people already suffer. What do you reply to these worries?

These are natural reactions, yet they are not deep. Both the Right and the Left should naturally support Clean Trade policies.

For those on the Right, the Clean Trade policy is not interventionist—it’s the opposite. Right now, our own laws send hundreds of millions of consumers’ euros, dollars, and pounds every year to empower violent and oppressive men in resource-rich countries to dominate the people. That’s the intervention, we’re intervening now. Clean Trade would stop those flows of money, it would stop our current intervention. And it would do it for market-based reasons, to correct a large flaw in international markets.

Go back to the principle that the people ultimately own their country, including its resources. That principle is not just our principle, it’s most of the world’s principle. That principle is affirmed in major treaties that have been signed by countries comprising 98% of the world’s population. Clean Trade just wants to protect property rights, the property rights of peoples in their resources. Those rights are now being violated, by the authoritarians and militias who sell off resources without the possible consent of the owners. A Clean Trade Act does nothing more than stop us from buying stolen goods. It enforces property rights, and helps to correct the massive circulation of stolen resources that is now normal in international trade.

For those on the Left, it’s important to see that a Clean Trade Act is not sanctions. Sanctions are punishments, and we’re not trying to punish anyone. All a Clean Trade Act does is to say, we don’t think it’s right to buy from those people. If you come to suspect that the open-air market across town is actually a place where thieves are selling goods taken from your neighbors, is it wrong for you to stop shopping there? No, it’s right. We shouldn’t be buying stolen goods. In fact, we should be doing what we can to help those people from whom the goods have been stolen.

Which leads to the last part of your question. It’s true that if enough countries stopped buying resources from a country like the Congo, many poor people would suffer in the short term from economic dislocation. But as bad as that will be, it’s better for them than the long term of the resource curse. Look at the statistics about the resource curse: you’ll see high rates of repression, civil conflict, grand corruption, and in many countries hunger and extreme poverty. We should no longer contribute to that. If you’re on the left, it will be hard to say, “The best way to help the people of the Congo is to keep sending our money to the corrupt and oppressive government, as well as to the murderous militias who have used mass sexual violence as a means of war.” The long-term benefits to the people of the Congo from Clean Trade outweigh the short-term disruptions.

The Covid-19 pandemic has affected the oil market severely (low prices, volatility, OPEC+ deal etc.). How do you evaluate these developments?

It’s been a wild ride in the past year. Oil is the most volatile major commodity, but even for oil the swings in price (including to prices well below $0 per barrel) have been exceptional.

Still, as the pandemic eases, everyone expects oil demand to recover to its previous levels and then keep increasing. I just saw in the paper today that some analysts are now predicting a return to the days of high prices, $100 per barrel and even more. That will mean a lot more money again in the hands of oppressive and sometimes aggressive autocrats. Which will again be bad for their countries, and bad for us.

Our most pressing concern is to find solutions in order to save the climate. How does the Clean Trade project relate with the environmentalist movement?

The best way to get off of blood oil is to get off of oil completely. That will happen, but it will take a while. Oil is still humanity’s largest single source of energy, 90% of the world’s transportation fleet runs on oil. The fossil fuels together are over 80% of the world’s energy supply, renewables combined are only around 5%. Oil is on its way out, but it will be a slow exit. Which means that the oil curse will continue to afflict the world—unless we do something about it.

A Clean Trade Act will be very positive for the environment. Banning authoritarian oil imports won’t stop the traffic here, because we can easily get our oil from other countries. But it will raise the price somewhat—in the US, for example, I predict a price rise of between 5% and 10%. That’s within the range of fluctuations that consumers are used to, but it’s a strong enough nudge to get people out of their gas-burning cars and into vehicles powered by the fuels of the future.

For the EU, it would likely take tens of billions of euros to stop importing natural gas from authoritarian countries like Russia and Qatar. That’s not trivial money but compared to what we’ve spent on COVID-19 it’s not a lot. Europe could lead the world taking a stand with the people of the world, against the dictators, as its democratic heritage would say it should. This would also send yet another message to markets that the old business as usual for oil is over.

Moreover, as long as we’re banning authoritarian oil imports, why don’t we take the opportunity of replacing as much of that energy as we can with clean energy? Critics will always find another problem with every proposal, but leaders should see a proposal like this as a big opportunity to make progress on several issues at once. We can peacefully support democratic reforms and increase our national security and do good for the climate all at once. Clean Trade can be green trade too.

The Greek economy is based -mainly- on the production of products and services of low and medium added value, a fact which led the country to fall into the ‘middle-income trap’.

The world is in the middle of a rapid global energy crunch. The current crisis could end up being the worst energy crisis since the oil crisis of the 1970’s. 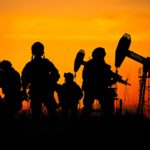 Resource curse, authoritarian regimes & how to change the rules | Interview with Leif Wenar